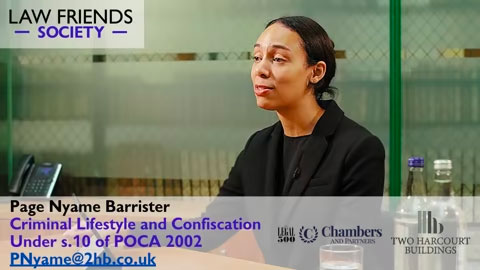 In this detailed seminar, we welcome Page Nyame to our ever-expanding Law Friends family to present on issues relating to criminal lifestyle and confiscation under the Proceeds of Crime Act (POCA) 2022. This informative presentation works well as a companion piece to fellow 2 Harcourt Buildings barrister Amy Oliver’s seminar Enforcement Proceedings Under POCA 2002 from 2021, and looks at in particular:

Page has a busy Crown Court criminal practice prosecuting and defending. She is confident working with young and vulnerable witnesses having completed vulnerable witness training and marshalled at Willesden Youth Court. She has recent experience of cases involving youth defendants and ground rules hearings in the Youth, Magistrates and Crown Court.

Outside of her professional work, Page has a keen interest in charity governance especially in causes related to advocacy for and by young people and the criminal justice system. 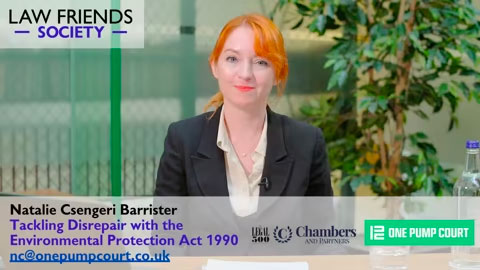 In keeping with Law Friends’ ethos of highlighting the meeting points of different aspects of law, Natalie Csengeri of One Pump Court provides an introduction for civil practitioners for tackling disrepair in a landlord and tenant context through the usage of the Environmental Protection Act 1990 in the magistrates’ court. In this talk, the following will be discussed:

Natalie’s housing law practice includes possession claims, unlawful evictions and matters involving disrepair (including prosecutions brought in the magistrates’ court under section 82 of the Environmental Protection Act 1990). As a result of her previous practice in criminal law, Natalie is particularly sought after where there is a clear intersection between housing law and criminal law. 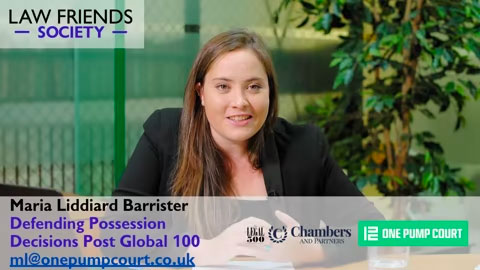 Defending Possession Proceedings Post Global 100 – Getting Past the First Hearing

In another focused look at social housing law, Maria Liddiard offers a general overview on defending possession claims in the context of the Global 100 case regarding property guardians and house in multiple occupation situations. In particular, the seminar looks at:

Maria is a pupil, specialising in Crime and Housing at One Pump Court. In her crime seat, Maria assisted with a wide range of defence cases in both the Magistrates and Crown Courts, as well as the Court of Appeal. A number of these have involved defences under the Modern Slavery Act 2015. Additionally, she has been involved in several cases with mental health aspects, including where a Trial of Fact has been conducted. She has also gained experience related to inquests into death in custody, and parole hearings.

In her Housing seat, Maria is currently observing and working a variety of areas including the prosecution of landlords under the Environmental Protection Act 1990, homelessness and allocations, possession claims and cases involving anti-social behaviour. Many of these cases have also involved issues under the Equality Act 2010. 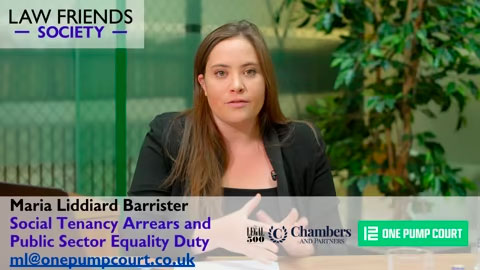 In this informative and wide-ranging seminar, we welcome Maria Liddiard, who takes a look at the ever-more crucial issue of social tenants in arrears. In-depth, she talks about:

Maria is a pupil, specialising in Crime and Housing at One Pump Court. In her crime seat, Maria assisted with a wide range of defence cases in both the Magistrates and Crown Courts, as well as the Court of Appeal. A number of these have involved defences under the Modern Slavery Act 2015. Additionally, she has been involved in several cases with mental health aspects, including where a Trial of Fact has been conducted. She has also gained experience related to inquests into death in custody, and parole hearings.

In her Housing seat, Maria is currently observing and working a variety of areas including the prosecution of landlords under the Environmental Protection Act 1990, homelessness and allocations, possession claims and cases involving anti-social behaviour. Many of these cases have also involved issues under the Equality Act 2010. In a year of political turmoil that has seen significant changes to police powers, Margo Munro Kerr takes an essential and informative look at the ramifications of the Police Crime, Sentencing and Courts Act 2022 and other protest law-related developments, including:

Margo is a criminal, immigration, and public law barrister. She accepts instructions in prison law and civil claims, particularly in actions against the police and unlawful detention. She has expertise in youth matters, in protest work, and in acting for victims of trafficking.

Margo has defended in criminal courts at all levels up to the Court of Appeal. She has a busy Crown Court practice and also accepts briefs in youth courts and magistrates’ courts, in particular for charges arising from protest.

Margo is regularly instructed in immigration appeals in the First Tier Tribunal and has worked on cases concerning asylum, humanitarian protection, articles 3 and 8 of the European Convention on Human Rights, and trafficking.

She is also regularly instructed in immigration related Judicial Reviews and has worked on cases involving asylum accommodation, unlawful detention, and delay.
Margo advises on civil claims, including actions against the police, negligence and GDPR breaches. 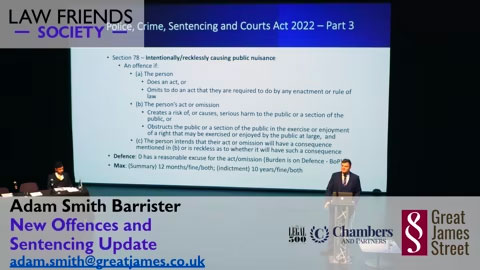 To complement the 2022 Criminal Law Update from Antony Bartholomeusz, fellow Great James Street barrister Adam Smith presents an update regarding the main new criminal offences that have come into force during October 2021 to October 2022, and an overview of changes to sentencing during the same period. The seminar specifically looks at:

Adam has a busy criminal practice appearing in the Crown and Magistrates’ Courts. He both defends and prosecutes and is currently awarded Grade 1 status on the Crown Prosecution Service’s Advocacy Panel. Adam represents clients charged with a variety of offences, including sexual offences, violence, drug offences, robbery, domestic violence, fraud and driving offences. Adam’s confident style of advocacy, combined with his impressive academic abilities, leads to highly commendable feedback from clients.

Adam is regularly instructed by policing bodies in criminal proceedings, including Sexual Harm Prevention Orders, Stalking Prevention Orders, Asset Freezing Orders, Community Protection Notices and ASBO’s. Further, Adam has been instructed to challenge threatened actions against the police in civil proceedings. He is instructed to undertake document reviews, particularly in relation to legally privileged material and is instructed as independent counsel to attend and advise on searches and raids. 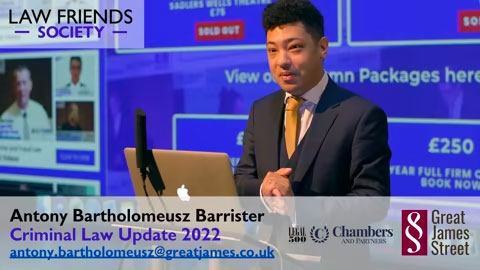 The star of our monthly Criminal Defence Law updates, Antony Bartholomeusz of Great James Street offers another expansive essential update for all dedicated practitioners, this time setting out developments over the last year in criminal law, evidence, practice and procedure, in particular looking at: 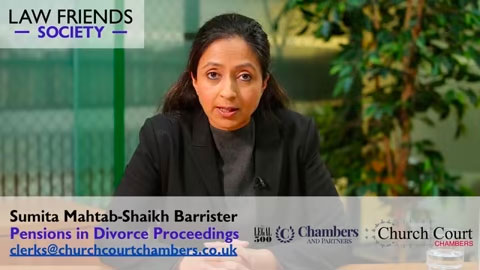 Despite appearing to be a dry topic, in this incisive seminar about pensions and divorces, Church Court’s Sumita Mahtab-Shaikh impresses on practitioners the importance of how to deal with this asset in financial proceedings, in particular looking at:

Recent approaches to pensions in divorce proceedings
Equality of income or capital division of pension
Ring fencing of pension contributions
Offsetting
Circumstances in which to instruct a PODE
What should the PODE be asked to consider in the report?
Documents to provide PODE
State pensions
Pension information forms
Undertaking
D11 application for permission to instruct a pensions expert

Sumita was called to the Bar in 2001. She practices in the areas of crime and family law. Her practice in the area of family law encompasses child arrangements (contact and residence); specific issue orders (name change, religion and schooling); adoption and special guardianship applications; domestic violence injunctions; financial matters and disputes and leave to remove from the jurisdiction.

As a result of Sumita’s criminal practice, she has particular experience in inter disciplinary cases, where there is a cross over between family law and crime, which provides for tough and effective advocacy. 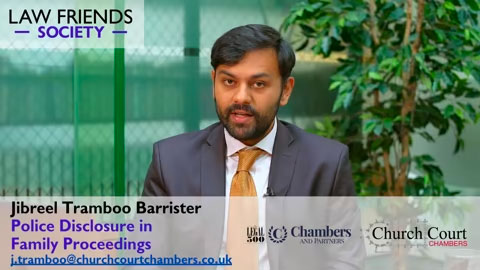 This seminar offers a broad introduction to police disclosure in family proceedings before offering insightful tips and advice on the subject, as well as practical examples in the form of case studies. In detail, the seminar looks at:

What is police disclosure?
How does it work?
Practical considerations
Does it work
Public law

Jibreel has a broad mixed common law practice. He has earned a reputation as a strong, robust and thorough advocate – often providing solutions to complex cases. He has also undertaken human rights work with a non-governmental organisation on various human rights situations across the world (including Yemen, Kashmir, Alaska, Palestine). He has attended sessions within the United Nations (Palais Des Nations, Geneva) and the European Parliament.

Jibreel’s expertise in the Family area begins with private child law – often building a strong rapport with his clients so that they feel comfortable and feel the compassion that he offers. Alongside this, he has dealt with wide-ranging financial issues between separated parties.

Jibreel has appeared at the First-tier Tribunal and Upper Tribunal dealing with complex public and human rights matters. He regularly advocates on the engagement of Article 8 ECHR. He often appears on matters of immigration and has expertly dealt with all relevant matters on Immigration to which he has provided effective and successful outcomes. 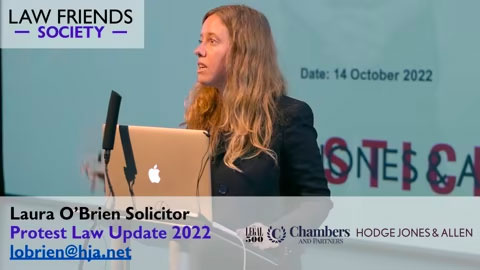 Demonstrating Law Friends’ commitment to keeping our members fully apprised of the latest developments in all the most relevant fields of law, Laura O’Brien returns to present an update on protest law – an area that has consistently made headlines. In particular, Laura looks at:

Aggravated trespass
Criminal damage and the Colston case
Police, Crime, Sentencing and Courts Act 2022
Things to look out for in the coming months

Laura is a dedicated defence solicitor and Crown Court advocate who fights on behalf of her clients to avoid prosecution wherever possible, whether by challenging the evidential basis of an investigation or prosecution or by challenging a decision that prosecution is in the public interest, with a specialism in protest law.

It is easy for people to get lost among the power struggle between the police, the prosecution and the defence. Laura focuses on preparation and communication, being honest and clear with her clients about their options.

Laura has a particular interest in representing children and young adults and defendants with complex psychological and psychiatric needs. She believes that every contact with the criminal justice system leaves a mark. Fighting to minimise the impact on young clients is particularly important; their experience of the criminal justice system can determine their future. Laura’s clients have taught her to understand their experience and perspective.