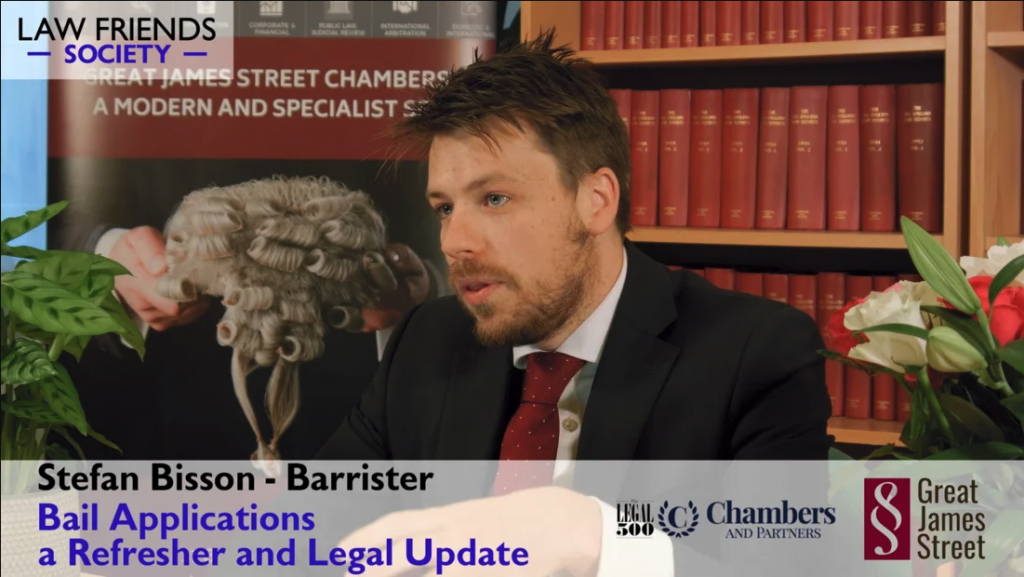 Four main ways to have client released from detention:
– By Home Office Bail
– If client’s main immigration case is successful
– Release by the High Court
– Bail from an immigration judge (Tribunal bail)
Home office bail
– Considered on papers only.
– No cost
– Can be applied for simultaneously
– Decision should be made within 10 days
– Always worth applying for, even if no response from HO, can be shown to Judge at immigration bail case.
– Use the Form 401, which is similar to the tribunal B1 bail form.
– Receive BAIL201 notice
If client’s main immigration case is successful and High Court:
– Once successful, Home Office has no power to detain client
– Generally released same day after administrative functions completed
Tribunal bail
Points to remember:
– Bail time limit: Still no time limit. (list other countries) Stories of some cases where individuals are held for over 2 years before being released
– Can apply every 28 days, unless there is a change of circumstances meaning you can apply earlier.
– Can apply earlier if you withdraw (7 days)
– You cannot be granted bail if the Home Office issues you with directions for your client’s removal from the UK within 14 days of their bail hearing. Removal directions should therefore include an actual date for when the Home Office intend to remove your client.
Tribunal bail
– Application costs: free.
– It is for the immigration authorities to show it is more likely than not that there is no reasonable alternative to detention.
– In all cases involving people detained under immigration powers, the first reason for detention is to enable the immigration authorities to carry out their functions.
– Safeguarding is a secondary purpose of detention and includes preventing a person absconding if released.
– Where immigration detention is no longer justified, bail should be granted.
Ideal things on an application
– Clean history – no previous non-compliance with bail (If does not exist, to much you can do about it) other than mitigate and explain differences to now – changes in circumstances
– Financial supporter with earnings and good financial history
– Financial supporter with close ties and ability to control the client
– Bail address with sufficient rooms
– Lack of criminal history
Financial supporter
– B1 Bail form allows. Two strong sureties ideal
– Sureties: no record of dishonesty
– Not been a surety where breach has occurred
– Should know the client well enough to encourage them to comply with conditions
– Should not know them well enough that they are aware of any previous breaches
– Clean bank records
– No sudden transactions that can’t be explained
– No risk of destitution
Accommodation
– Identity documents
– Need not be British, but need be legally in the UK
– Tenancy agreement
– Mortgage documents
– If no accommodation available, tribunal can provide directions if client destitute – test of “exceptional circumstances”.
– Consider conflict with criminal licence conditions
Key points
– Brevity
– Consistency
– Keep to core arguments
Core arguments
– Refer to bail guidance for Judges
– Para 32 – 41: likelihood of person failing to comply with bail conditions
– Para 35: Risk of absconding
– Para 36: Imminent prospect of removal
– Para 37: Previous history useful
– Para 38: Strong support and community network
Health
Refer to Adults at risk in immigration detention policy:
Level 1: Self declaration – some minor considerations afforded
Level 2: Professional evidence, psychiatrist etc. stating client is or may be adult at risk
Removal if:
– removal date fixed or can be fixed quickly
– public protection concerns justifying detention
– evidence that client is highly likely not to be removed unless detained
Health
Level 3: Professional evidence stating client at risk and detention would likely cause harm
Removal if:
– removal date has been set in immediate future, no barrier to removal
– client presents a significant public protection concern, or subject to a 4 year plus custodial sentence, or risk of national security
Prolonged detention
– Detention for three months would be considered a substantial period of time
– Detention for six months would be considered a long period of time
COVID-19 implications
– Subsequent to the filming of the talk, it has emerged that the Home Office attempted to influence the tribunal to stop the release of detainees.
– Arguments are clearly holding weight
– Judges are being pragmatic about health risks
You can contacty Stefan Bisson via his clerks on this e mail
clerks@greatjamesstreet.com