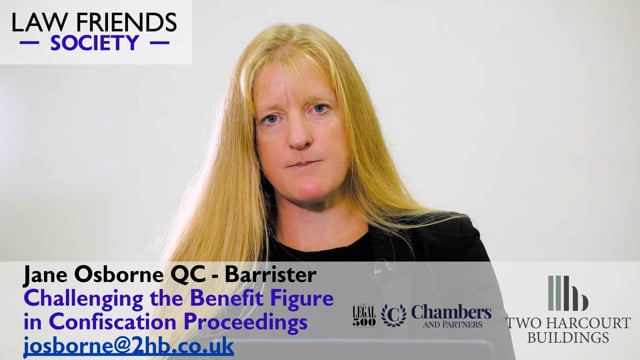 Ranked in Legal 500 for both General Crime and Fraud and in Chambers and Partners for Financial Crime, Jane has a leading practice in complex prosecution and defence work, and particularly in the field of financial business crime. She is regularly involved in Proceeds of Crime Act proceedings to recover the proceeds of such offences.

Jane begins by debunking myths about this area of practice. She then proceeds to outline relevant legislation, illustrating the mechanics behind the process of the court confiscating items. Through referring to case law, an array of circumstances are presented; highlighting important considerations to be made and how assumptions can be scrutinised and proven to be incorrect.

Property held by the defendant

Jane is regularly instructed in cases of conspiracy to defraud and to cheat the revenue, MTIC and carousel frauds, and in multi million pound money laundering investigations. She is also very experienced in prosecuting and defending serious cases involving serial sex offences, serious violence including homicide, and offences arising from investigations into organised crime groups.

Jane is described by those who instruct her as jury friendly with a reassuring manner which puts jurors at ease. She has a straightforward manner and is capable of making even the most complex evidence easy to understand for a jury. When cross-examining she is commanding and assertive. Her attention to detail is particularly apparent when presenting and challenging detailed financial evidence, or complex telephone and cell site evidence.

Those who instruct Jane to defend identify her excellent client care skills as a particular strength. She is routinely instructed to represent those with learning difficulties and mental health issues and also young defendants charged with very serious offences. She is a talented jury advocate who gains the trust and respect of juries through her detailed and thorough knowledge of the detail of the case.

Jane also has a substantial appellate practice having appeared in the court of appeal in the recent past to argue points of law relating to conspiracy indictments, expert evidence and the legality of covert surveillance methods.

Jane is available and qualified to take instructions directly from members of the public in appropriate cases.