Extradition World Tour and Key Updates, and Observations on Changes in Extradition Law Since 1982 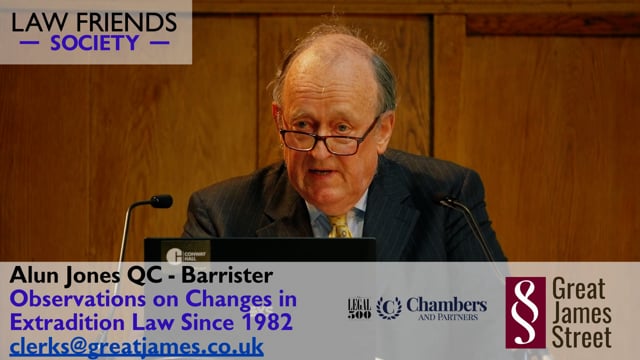 Alun Jones QC and Karen Todner are a formula one combination for any extradition case across any jurisdiction at any level. With vast experience in the Supreme Court, international courts and the very highest profile press settings Alun and Karen team up for Law Friends as they have many times on cases with the most serious challenges against governments globally.

The discussion will cover

Alun Jones QC is Head of Chambers at Great James Street Chambers and has appeared and advised in extradition cases for almost 40 years. He has conducted 24 full appeals in extradition cases in the House of Lords, Privy Council and UK Supreme Court, acting in ten of them for foreign governments, appearing as leading counsel in all but the first four of them, listed below. This has given him very wide international experience of foreign and Commonwealth jurisdictions.

She qualified in 1987 and for many years was the MD of one of the largest criminal defence firms in the UK.  She now specialises in and has a formidable reputation in criminal defence and extradition.

She is admired for her ‘fearless’ approach to complex cases. Her peers characterise her as a ‘formidable opponent’ and a ‘vociferous litigator’.

Karen Todner is praised as a “top extradition solicitor” by a source, who goes on to note: “She is excellent with clients and is someone you want to have on your side.” She has particular expertise in handling extradition requests from Russia, as well as those that require complex consideration of human rights issues.

“A FORCE TO BE RECKONED WITH.”

Karen has been awarded the Law Society Excellence Award as being Legal Personality of the year. She has also been listed in the Hot 100 Lawyers of 2013 and was shortlisted for Halsbury’s Legal Personality of the Year Award 2013. She is ranked in Chambers Directory as a ‘force to be reckoned with’ and as Band 1 in Chambers for the last six years. She has addressed Parliament and the Access to Justice Committee on human rights issues.

Karen specialises in criminal law including extradition and fraud.