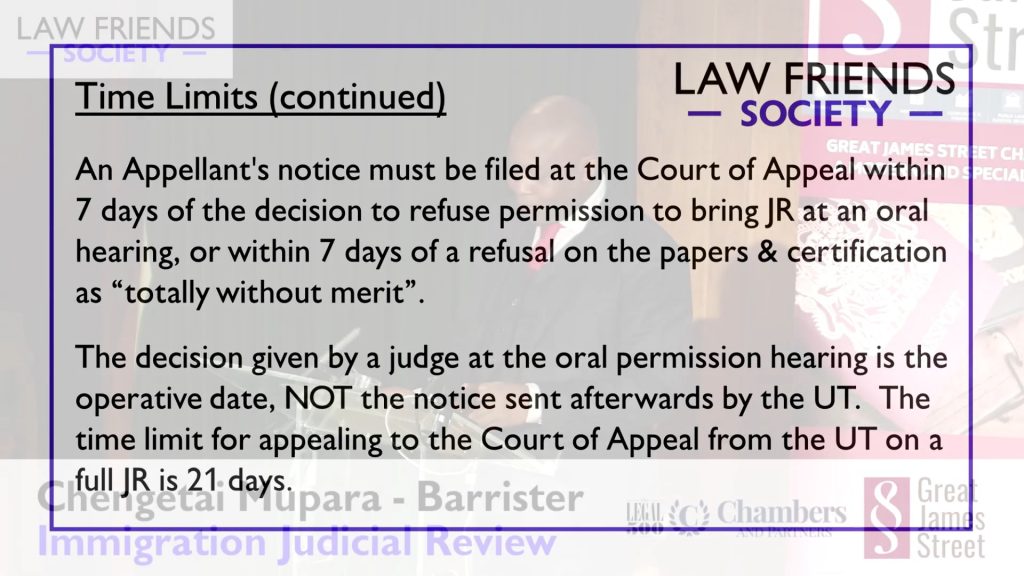 S25 – extradition is barred where it would be oppressive by reason of physical or mental ill-health.
Abuse of process; this rarely succeeds
Court of Appeal
Certification Under the 2002 Act
JR in these cases is not of the refusal to grant leave, but of the certificate.
Factors to be Considered
i. Prospects of success at appeal for the underlying claim, particularly where asylum & Article 3 issues are raised;
ii. reason why the claim was not advanced in the original appeal;
iii. impact of that explanation on the credibility of the new claim;
iv. fact that a applicant has lied previously should be taken into account but is not necessarily determinative.
Fresh Claims Under the
Immigration Rules – Paragraph 353
FEEA-Related Applications
Detention, Search Warrants
& Type of Leave Granted
Judicial review is sometimes appropriate in cases of unlawful detention, challenging the use of search warrants, or where the SSHD has granted a particular type of leave following an application or a successful appeal.
Unlawful Detention
Cart Judicial Review
Where an appeal is refused by the First Tier Tribunal, & permission to appeal to the Upper Tribunal is then granted, a refusal on the appeal itself by the Upper Tribunal can be appealed to the Court of Appeal.
Settlement & Costs
In all immigration JR cases, & particularly in cases involving certification or paragraph 353, the SSHD tends to fight tooth & nail until permission is granted, & then seek to settle it.
This does not always happen, but frequently occurs.
The SSHD will almost always attempt to settle any JR on a “no order as to costs” consent order basis.