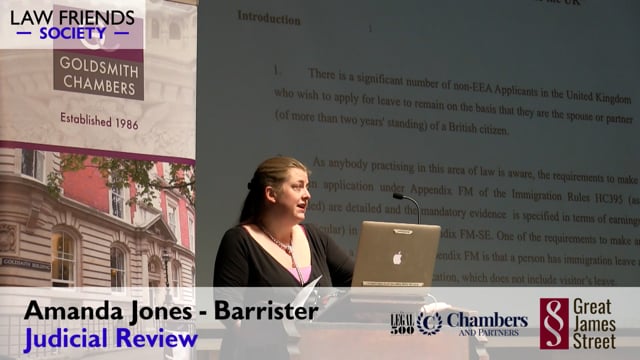 Applications, Appeals & Judicial Review on the basis of “Insurmountable Obstacles to Family Life Continuing outside the UK”.

1. There is a significant number of non-EEA Applicants in the United Kingdom who wish to apply for leave to remain on the basis that they are the spouse or partner (of more than two years’ standing) of a British citizen.
2. As anybody practising in this area of law is aware, the requirements to make such an application under Appendix FM of the Immigration Rules HC395 (as amended) are detailed and the mandatory evidence is specified in terms of earnings (in particular) in great detail Appendix FM-SE.
Sources of Law
The Immigration Rules have, since July 2012, codified Article 8
applications. Appendix FM applies to partner or parent applications.
If Article 8 outside the Rules is to be relied upon, the tests under the Nationality, Immigration and Asylum Act 2002 s.117B.

When preparing any application relying on insurmountable obstacles under Appendix FM EX it is essential to prepare that application with an eye to judicial review. Few cases are granted by the Secretary of State under paragraph EX.

Many of the cases which are refused, and it does appear to me to be a majority, are further certified as ‘clearly unfounded’ within the meaning of the Nationality, Immigration and Asylum Act 2002 Section 94(1).

Insurmountable obstacles applications should always be accompanied by detailed witness statements from both the Applicant and his or her partner.

Those witness statements and the evidence provided need to address themselves to all possible aspects of the Rules which could be under challenge.

It is important not to focus on insurmountable obstacles to the extent that there is insufficient evidence about genuineness of the relationship.