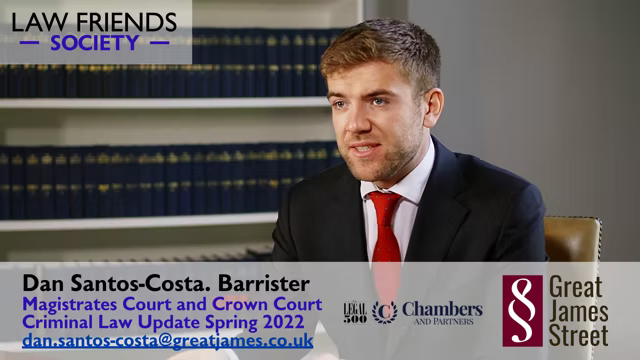 Dan Santos-Costa is a Crime Pupil Barrister at Great James Street Chambers, with an interest in practice within criminal law and extradition. Prior to starting pupillage, Dan worked as a criminal defence paralegal for a busy firm of solicitors.

This is a general update on legal developments over the past 12 months that are relevant to practices in the Police Station, Youth Court, Magistrates Court and Crown Court. This includes a new protocol and an increase in sentencing powers in magistrates courts, new guidance regarding offensive weapons, as well as new Protest Law. Dan also presents some interesting case law developments.

Dan joined Chambers as a first six pupil in January 2022.

Prior to starting pupillage, Dan worked as a criminal defence paralegal for a busy firm of solicitors. As a paralegal, Dan worked on a variety of criminal matters, managing cases involving assault on emergency workers, possession of bladed articles, possession of controlled drugs, including supply cases, assault occasioning actual and grievous bodily harm, breach of Court orders, and the imposition of Sexual Harm Prevention Orders and Criminal Behaviour Orders.

Dan has two and a half years’ worth of experience as a paralegal in Criminal Law, Extradition and Insurance Litigation.

Dan is a Free Representation Unit representative and regularly appears for clients in the First-Tier Social Security Tribunal in their claims for Employment Support Allowance and Personal Independence Payment.
He was an Independent Custody Visitor for the City of London Police between 2019 and 2021.