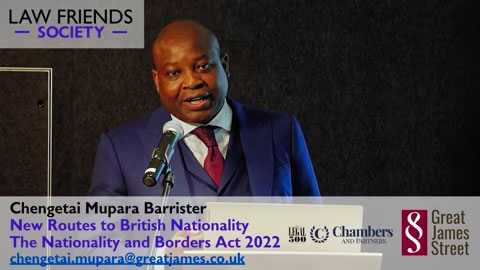 As part of Law Friends’ continued dedication to equality and human rights, here Great James Street’s Chengetai Mupara returns to talk about the latest developments regarding those people seeking British nationality, especially those who may have suffered injustice in the past, specifically:

Chengetai’s passion for advocacy and human rights started from a very young age. He started off as a pro-democracy campaigner, student activist and a human rights defender in Zimbabwe. He now has a busy practice and regularly appears in the First-tier Tribunal (“FTT”) and Upper Tribunal of the Immigration and Asylum Chamber, County Court, Crown Court and Magistrates’ Courts.