Police Station Cautions and Other Out of Court Disposals 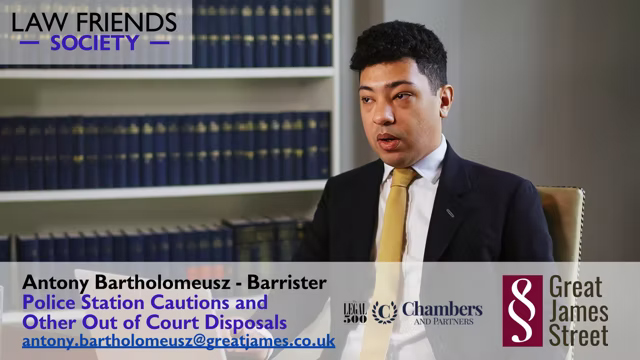 Antony Bartholomeusz is an experienced criminal defence Barrister who understands the Magistrates Court and the Crown Court from the Defence perspective primarily, but also occasionally as a prosecutor adding weight to the comprehension of the case.

Here Antony takes us through the current state of play with regards to a range of Police Station Cautions and Out of Court Disposals, including significant developments under the Police, Crime, Sentencing and Courts Act. Requirements in order to achieve these outcomes (and some notable difficulties) are outlined, as well as ways in which these outcomes can be challenged from a prosecution perspective. Advantages and disadvantages associated with Cautions and Out of Court Disposals are discussed.

In addition to a busy criminal practice, I am instructed to advise in public law matters and civil law matters involving public authorities.

As a ‘third six’ my practice focused on criminal advocacy. I gained experience of specialist aspects such as the Modern Slavery Act 2015, proceeds of crime and extradition. I received instructions from public authorities including the CPS, Metropolitan Police, local authorities, and Transport for London.…see more.

The Legal Response Initiative provides advice and assistance to developing states and NGOs in relation to climate change law. I attended the UNFCCC negotiations in May 2016, November 2017 and June 2019. I have also coordinated the London-based Situation Room during UNFCCC negotiating sessions, supervising volunteers and identifying appropriate external advisors. My initial involvement with the LRI began as a volunteer, providing legal research in relation to draft texts and proposals before and during the Paris Conference of the Parties in 2015

I completed a 12-month pupillage at 6 Pump Court. As a second-six pupil I appeared in criminal, civil and regulatory cases.

I taught public international law, constitutional law, administrative law and European Union law. In Autumn 2017 I was the module convenor and examiner for a final-year introductory module to public international law, for which I designed the course and gave a series of lectures and tutorials. I also coached the University’s 2016-17 team for the Telders International Law Moot Court Competition. In Spring 2018 I was the module convenor and examiner of European Union Law I, a compulsory module for over 200 undergraduate and postgraduate students.

I taught a range of law subjects to LLB, LLM, BPTC and GDL students of varying abilities as a self-employed tutor. I also assist students seeking training contracts with interview preparation.

I led several groups of public law tutorials and delivered occasional lectures in comparative public law. I was named ‘Lecturer of the Year’ by a vote of students in March 2017.

I developed the Global Rule of Law Exchange focusing on the relationship between the rule of law and development. I researched and analysed the impact of the Criminal Justice and Courts Act 2015 on financing of judicial review and non-party costs orders. I also researched proposals for a UK Bill of Rights and investigated African sub-regional courts understanding of the rule of law.

I completed a comparative research project considering the human rights, employment law and fisheries regulations under the domestic law of four Asian countries. This scoping research informed a campaign against exploitative labour practices used by those who conduct illegal, unreported and unregulated fishing.

I provided legal research on topics including climate liability, international and European environmental law, law of the sea and human rights, working within a six-person legal unit. The highlight of my six-month internship was research, drafting and case management for applications on behalf of the Arctic 30 to the European Court of Human Rights for Greenpeace.

I coached two moot court teams for the Grotius Centre for International Legal Studies’ summer school on International Criminal Law. I also gave a short talk about mooting to the entire cohort and took questions. Attendees ranged from undergraduates to national judges and human rights experts