Preparing for the Initial Hearing in Part 1 European Extradition Cases 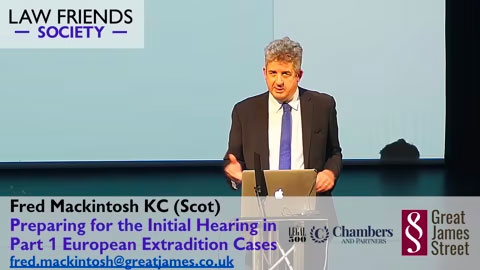 Law Friends is delighted this year to add the expertise and experience of Fred Mackintosh KC to our ever-growing portfolio of specialists. In this informative talk, he makes suggestions about what to consider when preparing for an Initial Hearing in a Part 1 extradition hearing in Westminster Magistrates Court, splitting the talk into three main parts:

Fred is one of Scotland’s leading extradition counsel. He specialises in criminal, extradition, public law and judicial review, regularly appearing in complex cases before the High Court of Justiciary Appeals, the Sheriff Appeal Court in Scotland and the Royal Courts of Justice.

Fred was called to the Scottish Bar in 2000 and took silk in 2019. He has a wealth of experience and appears in the most difficult and complex cases. In 2022, Fred was called to the Bar in England and Wales and accepts instructions both leading and as junior alone in all areas of extradition law, representing clients in complex proceedings from Westminster Magistrates’ court to the High Court.

In Scotland, outside of the High Court of Justiciary Appeal Court, Fred has a busy first instance extradition practice and is also regularly instructed in challenging appeals by Stated Case, Sentence Appeals and Bills of Suspension before the Sheriff Appeal Court. In the field of judicial review in the Court of Session, he has significant experience of challenging decisions of the Parole Board for Scotland, Police Scotland, the United Kingdom Government, and Scottish universities. He has been instructed in respect of the constitutional status of the Lord Advocate, judicial review of extradition legislation, human trafficking, advice to public bodies around the impact of the criminal law on their staff, disciplinary matters involving students at Scottish Universities, aviation safety and animal welfare.

Alongside his practice, from 2010 to 2017, Fred taught Criminal Practice and Procedure and Advocacy at the Edinburgh University School of Law as a Senior Teaching Fellow in the Scottish equivalent to the Legal Practice Course. From 2013 to 2017 Fred was the Law Society of Scotland examiner for criminal and civil procedure and a member of the society’s board of examiners.