Protest and the Criminalisation of Communities 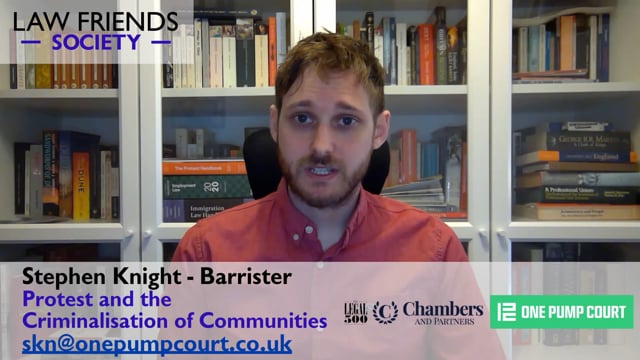 Stephen Knight is a focussed commentator and pinpoint accurate practitioner, a rock in a storm for the underdog and a lead Barrister for refugees, the homeless and protesters alike. A real gem.

At the start of this talk Stephen refers to a session we filmed on Protest Law with Margo Munro Kerr and invites you to watch gem. you wish to do so you should do so now for its context to be of benefit in this session

The Government crackdown on protest

How criminalisation is achieved?

Intimidation and harassment by the state

Common offences under the 2000 Terrorism Act

Wide actions and definitions and Law S1 and S2

Section 3, proscription, listed groups and others

Police training material and a culture of suspicion

Stephen is a committed criminal defence and public law practitioner. He has been described by his clients as “warm and friendly, but formidable”, “razor-sharp”, and “a relentless advocate”, and by his instructing solicitors as having a “breath-taking ability to condense facts and legal arguments in a terse yet persuasive style” and a “huge heart and ability to empathise with the wrongfully convicted and their families”. His approach to his cases is informed by his work with the Haldane Society of Socialist Lawyers, where he helps to co-ordinate the legal observing project.

He practises in all areas of criminal law, specialising in protest law and appellate work. Stephen’s crime practice has seen him defending in a wide range of criminal cases including:

Stephen is also a member of the Immigration Team. He regularly appears in the Upper Tribunal, High Court, Court of Appeal on human rights and asylum matters. He is currently instructed in a number of high-profile cases in the High Court and Court of Appeal.