Qualifying Child. Proving it is Unreasonable for a Child to Leave the UK 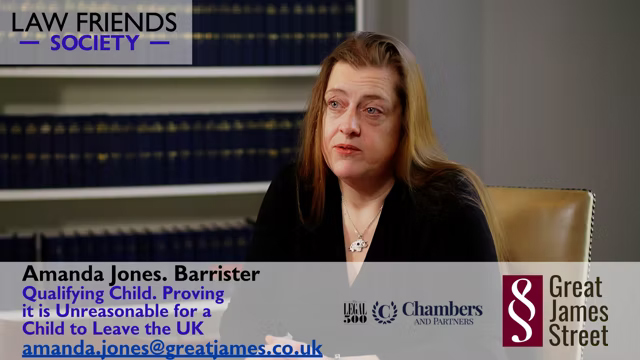 In this session, immigration and public law specialist Amanda Jones of Great James Street discusses “qualifying children” — British citizens and children who have lived in the UK for more than seven years – and the tests to be applied under the Nationality, Immigration and Asylum Act 2002 s.117B and the Immigration Rules.

Amanda is a specialist in immigration and public law. She has advised and appeared in numerous immigration matters in the Court of Appeal, and in the Administrative Court on appeals, judicial review and injunctions. Emergency judicial review grounds and out-of-hours injunction applications (including, if necessary, to the Court of Appeal) are a regular part of her practice.

Amanda is instructed in asylum cases, particularly in relation to Afghanistan, Pakistan, Bangladesh, India, Iran, Iraq, Syria, Lebanon, Sri Lanka and Saudi Arabia. She also deals with entry clearance work, including the points-based system, visitors, and family reunion, deportation appeals in relation to criminal convictions or alleged terrorist connections, and cases in which a threat to national security is alleged.

Amanda frequently advises on and drafts fresh claims in relation to human rights and asylum, after an initial appeal has been exhausted, and has been instructed on a numbers of cases involving breaches of policy and legitimate expectation in immigration law.